Looking back I see I had a very good (and long) childhood.  In comparrison to the tweens of now, I was still role playing with my seven year old sister in my twelfth year and having a ball.  Television, like now, was a dominant feature of my childhood and much of our role playing revolved around what we saw on the small screen every afternoon after 3.30pm.

in my Television exhibit:

Was the show we jumped up from our homework to watch every afternoon.  Even now I can sit down to a DVD full of Anime-style action and still enjoy it (though probably for different reasons).

I feel sorry for children who’s lives were not enriched by the antics and philosophies of the series.  I’ve just read that 13 episodes not dubbed in the late 70’s have recently been done so I think my virtual  museum (and my house) need the entire series on continual rerun just like I dreamed when I was a kid

When The Goodies was first shown on Australian TV ABC were inundated by letters of complaint from concerned parents.  How dare they make a show for children with so much smut and sexual inuendo as The Goodies.

Of course, Tim Brooke-Taylor, Graeme Garden and Bill Oddie never intended their show for children.  It was in competition with the highly popular Monty Python’s Flying Circus for audience and was, at best,  family entertainment.   Lucky for us ABC ignored the complaints, tamed down some episodes and continued to run them anyway.  I think their bicycle built for three would be an appropriate addition to this wing of the virtual museum. 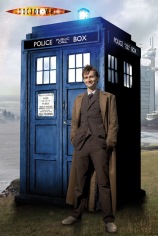 I did meet someone on the weekend who’s mother wouldn’t let her watch any of these splendid shows, but even she knew who The Doctor was.  As a child I wanted to set  up a small community of avid Doctor Who fans on board the paradoxially spacious TARDIS.  That Doctor Who has been running for more than 40 years is an achievement, that it is one of the most beloved TV series, and one of only a few scifi that can boast that is amazing.  But the thing that does it for me is that the word TARDIS (now spelt tardis) is now a word in the English language meaning a space that looks larger on the inside than it does on the outside.  Pretty good for a low budget tv show from the 60’s.

Not your Usual Bag of Dice

A place to share thoughts and ideas about Dungeons and Dragons

WordPress.com is the best place for your personal blog or business site.